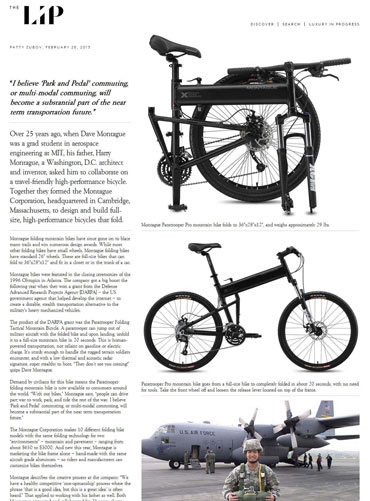 “I believe ‘Park and Pedal’ commuting, or multi-modal commuting, will become a substantial part of the near term transportation future.”

Over 25 years ago, when Dave Montague was a grad student in aerospace engineering at MIT, his father, Harry Montague, a Washington, D.C. architect and inventor, asked him to collaborate on a travel-friendly high-performance bicycle. Together they formed the Montague Corporation, headquartered in Cambridge, Massachusetts, to design and build full-size, high-performance bicycles that fold.

Montague bikes were featured in the closing ceremonies of the 1996 Olympics in Atlanta. The company got a big boost the following year when they won a grant from the Defense Advanced Research Projects Agency (DARPA) – the US government agency that helped develop the internet – to create a durable, stealth transportation alternative to the military’s heavy mechanized vehicles.

The product of the DARPA grant was the Paratrooper Folding Tactical Mountain Bicycle. A paratrooper can jump out of military aircraft with the folded bike and upon landing, unfold it to a full-size mountain bike in 20 seconds. This is human-powered transportation, not reliant on gasoline or electric charge. It’s sturdy enough to handle the rugged terrain soldiers encounter, and with a low thermal and acoustic radar signature, super stealthy to boot. “They don’t see you coming!” quips Dave Montague.

Demand by civilians for this bike means the Paratrooper folding mountain bike is now available to consumers around the world. “With our bikes,” Montague says, “people can drive part way to work, park, and ride the rest of the way. I believe ‘Park and Pedal’ commuting, or multi-modal commuting, will become a substantial part of the near term transportation future.”

The Montague Corporation makes 10 different folding bike models with the same folding technology for two “environments” – mountain and pavement – ranging from about $650 to $3000. And new this year, Montague is marketing the bike frame alone – hand-made with the same aircraft grade aluminum – so riders and manufacturers can customize bikes themselves.

Montague describes the creative process at the company: “We have a healthy competitive ‘one-upmanship’ process where the phrase ‘that is a good idea, but this is a great idea’ is often heard.” That applied to working with his father as well. Both Montagues competed and collaborated for 25 years, always striving for “Performance and Portability” (the company’s motto), until the elder Montague died in February 2011. “He and I developed some great products by being a little competitive with each other,” Montague recalls. “At the end of the day, the inventor was a Montague either way, so which idea was whose didn’t really matter.”