While the idea of electric bicycles has been around for quite a while, they have truly come to the forefront in the last decade. Better technology, smaller and lighter batteries with improved range, and lower costs have allowed them to be a viable choice for an increasing number of riders.

Commonly referred to as “e-bikes”, they make up a large and growing percentage of bikes sold all over the world. In Germany, one of the largest bike markets in Europe, e-bikes made up 20% of all bicycles sold in 2017*, and in Belgium, 50%*. While the US is slightly behind Europe in adoption, electric bikes are exploding in popularity. Perfect for transportation cycling, they make hills less of an obstacle, distances more manageable, and heavy cargo nearly a non-issue. Beyond their utility, they’re just plain fun. E-bikes are fantastic recreation vehicles, allowing you to explore more miles of road and trails than previously possible. They’re no stranger to mountain bike parks either as the E-MTB category continues to expand.

There are a variety of e-bike designs, motor systems, battery configurations, and key players in the industry. Let’s take a closer look. 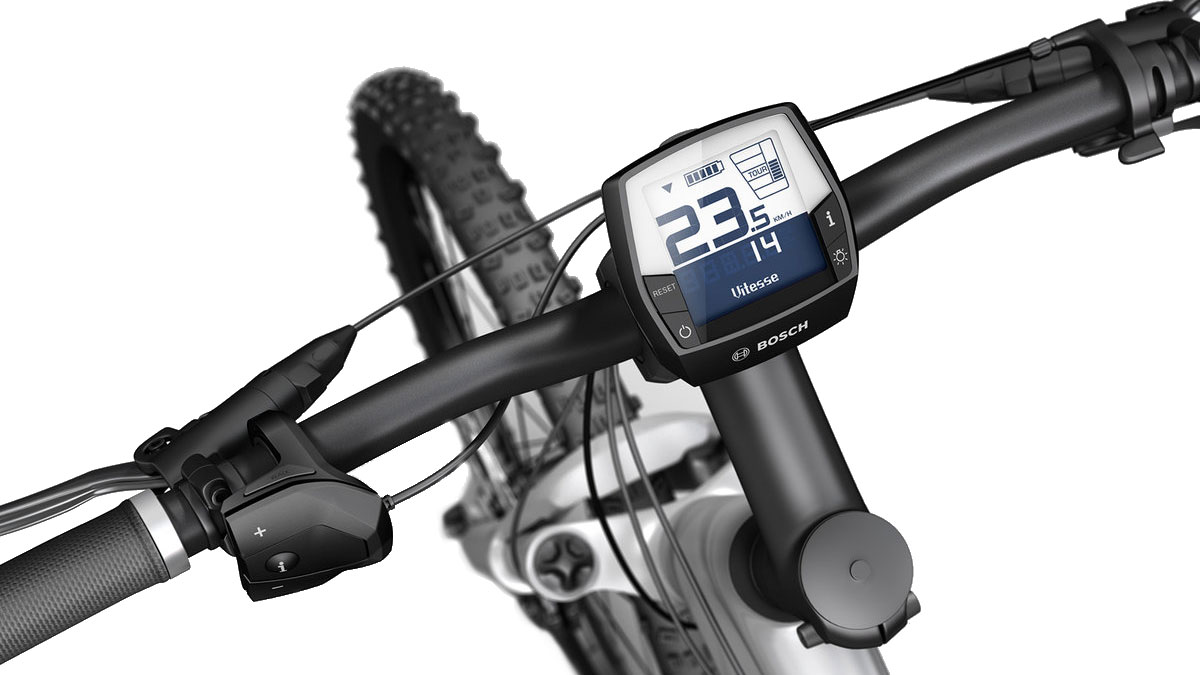 The most common type of electric bike is the pedal assist or pedelec. The rider pedals the bike normally while a motor provides assistance, increasing the power transmitted to the rear wheel. The pedaling takes far less effort than it normally would, even in high gears, which allows for higher speeds and effortless climbing over steep hills. Settings can control the amount of assistance the rider desires but to be considered a Class 1 e-bike in most of Europe, the system cannot provide assistance over 25 kilometers per hour (kph) or approximately 15 miles per hour. In the US this class is limited to approximately 32 kph or 20 mph. A class 1 designation allows these bike to be used on most roads and paths where normal bikes are allowed and do not require any additional licensing.

Much like a motorcycle or scooter, a throttle operated e-bike propels the bike forward without any additional pedaling from the rider. Most can provide a variable amount of power depending how far the throttle is pushed. These are much less common than their pedal assist counterparts as many countries have laws that prohibit them entirely. The European Union requires an e-bike only provide power while the pedals are moving forward, so throttle e-bike are most common in the United States and China where little legislation exists to limit their use. Common

The design of a speed pedelec is similar to a standard pedelec but as the name implies, they allow for a higher top speed of 45 kph or approximately 28 mph . In many areas this class of e-bike is considered a motor vehicle requires its riders to be licensed.

At the heart of any e-bike is an electric motor, and it can be located in one of two places, the center of the frame or one of the hubs. The location of the drive unit determines how the bike fundamentally operates and what it is capable of.

The front hub motor is the simplest e-bike design and as such, is the most limited in capability. Front hub motors are generally only used with throttle systems as it is more challenging to provide assistance based on rider input when the motor is not part of the drivetrain. Exceptions do exist such as the Brompton folding e-bike which utilizes a front hub motor and pedal assist. They can also have problems with traction since the majority of the weight on a bicycle is over the rear wheel. Cornering while accelerating can be especially tricky when the drive unit is in the front wheel. Given these limitations, the front hub motor is the least common e-bike system and is most often found on inexpensive conversion kits as they can easily be added to almost any bike.

A rear hub motor can accommodate both throttle and pedelec, and many systems offer both with the flip of a switch. They can also be retro-fitted to non-folding bike frames so they are the most popular for electric conversions. They’re fairly inexpensive to produce and can go unnoticed since they appear much like an oversized traditional bike hub. However, they create an uneven distribution of weight with the motor in the rear wheel which can affect handling. Common rear hub motors include BionX, Stromer, Xion, Dapu, and BaFang.

A mid-drive e-bike system places the motor in the center of the bike frame and integrates it with the bottom bracket and cranks. Since the motor is activated by pedaling, a bike with a mid-drive system will always be a pedelec. The mid-drive design offers many benefits over a hub motor, making it the system of choice for most pedal assist production bikes. A mid-drive delivers more torque than a similarly powered hub motor and by being centrally located, distributes weight more evenly on the bike. The motor is driving the crank arms rather the wheel so it can take better advantage of the range of gears on the bike. A torque sensor can also be more easily integrated to measure the amount of input from the rider. This sensor allows the amount of assistance to be automatically varied to match the intensity of the rider’s pedaling which creates a smoother, more fluid experience. Popular mid-drive systems include Bosch, Brose, Shimano Steps, Yamaha, and BaFang. 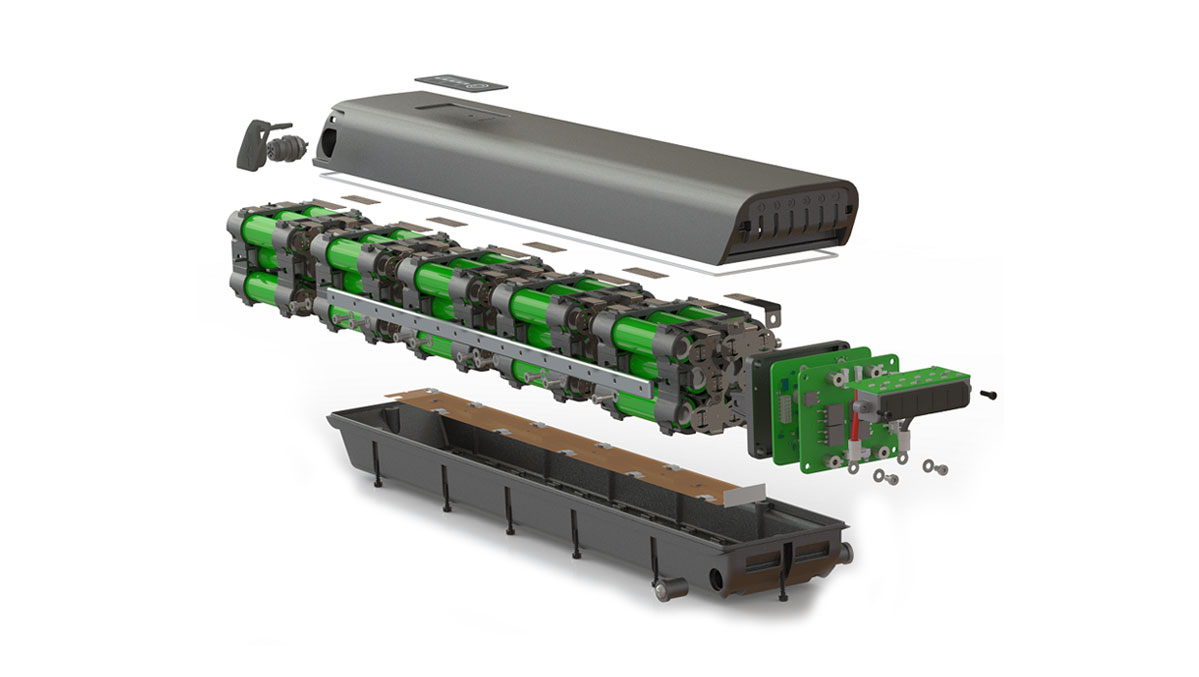 Every electric bicycle needs a source of power which is provided by a rechargeable battery. Modern e-bike batteries are usually lithium ion and composed of multiple battery cells that are linked inside a larger case. As technology improves, these batteries continue to get lighter, smaller, and more powerful. However, they are a significant source of weight on any electric bike, so placement and size are important factors. Ideally a battery will be as light as possible while still providing substantial range, the distance an e-bike can travel on a single charge. Below are some of the most common battery configurations you will find today.

An e-bike battery can be mounted to a rack on the rear of the bicycle. These racks are normally designed like a traditional cargo carrier and can double as a place for panniers and additional storage. This battery is usually above the rear wheel with this design which places the weight quite high off the ground. This can affect handling when cornering and can make moving the bike by hand more cumbersome. However, it is a versatile mounting system and provides a place to mount a battery on nearly any frame design.

On production e-bikes, the most common mounting location for a battery is on the down tube, the frame tube that goes from the front of the bike down to the crank area. Placing the battery here puts the weight low on the bike which improves handling and makes wiring easier with a mid-drive system as the motor is located directly behind the battery. They can be mounted on top of a standard round or ovalized tube or they can be integrated into an oversized tube.

An E-Bike for Any Occasion

Nearly every category of bicycle now has an electric version available. Road bikes with integrated light-weight electric systems exist to appease the roadie crowd looking for some extra assistance while full-suspension electric mountain bikes make those grueling climbs before the descents that much more bearable. City bikes, trekking bikes, cargo bikes, and folding bikes are all coming with everything from minimal hub motors with integrated batteries to massively powerful 1000-watt systems. Keep an eye out for a full-size folding e-bike from Montague in the very near future!