The word utopia comes to us from Sir Thomas More’s 1516 work of that name.  It means the ideal place or perfect society, but it comes from the Greek roots for “the place that cannot be”, or “no place”. Being no place in particular means it cannot be defined or limited, but it also suggests that it cannot ever exist.

“…But the burthen of the minor traffic, if not the whole of it, will certainly be mechanical.  This is what we shall see even while the road is still remote, swift and shapely motor-cars going past, cyclists, and in these agreeable mountain regions there will also be pedestrians upon their way.  Cycle tracks will abound in Utopia, sometimes following beside the great high roads, but oftener taking their own more agreeable line amidst woods and crops and pastures; and there will be a rich variety of footpaths and minor ways…” A bit more than a century ago one man’s ideal society included bicycles, everywhere.  The bicycle was by this point in history a normal part of daily life, and so it would have made plenty of sense to consider that it would continue on in such a fashion.  In the decades prior to the publication of A Modern Utopia bicycle technology had advanced to the point of a freewheel, coaster brakes, the pneumatic tire, and gearing systems (although not widely used); at the rate this technology was advancing it could perhaps have been the common sense of the times to conclude the bicycle would only increase in usefulness and usage.  And surely the bicycle has stayed with us, waxing and waning with the times.

The early ’70s saw the only years when bicycle sales have ever exceeded car sales, due to an oil embargo.  These days bicycles are again making their way to the fore.

Do you know what a bicycle utopia looks like?  Can you point out the way?

In this age in which we live we have an abundance of transit options; all manner of ways of crossing water, sky, and land – most involving internal combustion engines – just as Wells presupposed.  We still have bicycles, even ones that fold! Does a modern bicycle Utopia exist?  And if so where is it?

Many would point to Copenhagen as the paragon of the modern world for cycling quality.  More than 36% of trips in Copenhagen were taken on bicycles by 2009, with this being reported as high as 50% this year.  Cycling infrastructure abounds, separated cycle tracks, parking, air tanks for use refilling tires, etc.  The land is mostly flat, cycling is common place, and the winters are manageable so cycling has evolved adornment in an internationally recognized and followed Cycle Chic movement.

Boston is certainly not yet a cycling utopia, but it is a great cycling city.  There are beautiful paths, some new and some old and in need of better maintenance.  The Dudley White path serves the Charles River Basin as a lovely place to cycle.  We have miles of new bike lanes all round the city, and what debuted last week – the North Bank Bridge.  (More here) 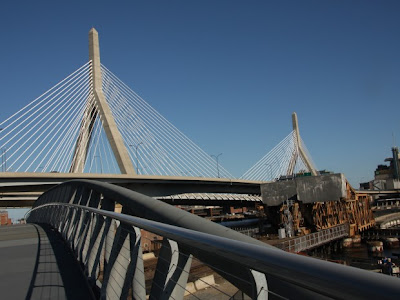 At last one can cycle from the Esplanade on the Boston side to the Charlestown Navy Yard if one so desires.  This opens up continuous routes for cyclists and pedestrians, suddenly making a series of parks that had once been lovely dead ends into part of an urban journey of beautiful public green spaces.  And certainly shouldn’t a utopia have such a thing?

This also opens up new bicycle commuting options.  Whereas previously navigating from north to south (or vice versa) in this part of the city on a bicycle required very round about approaches, now a direct route opens for enhanced cycling commute options.  Priority infrastructure for people traveling by foot and bicycle is at last reaching the urban consciousness in a manifest fashion.

Cycling around Boston may not yet be utopia, but it gets better every day, not just because of Mayor Menino’s pledge that the car is no longer king in Boston, but because every day more people get on their bikes, each month unveils new and more reasons to cycle.  Slowly but surely, we keep pedaling toward cycle utopia.