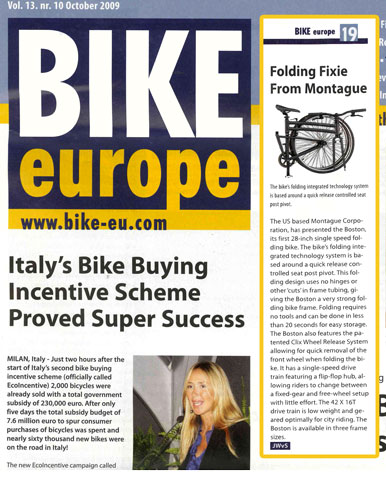 The US based Montague Corporation, has presented the Boston, its first 28-inch single-speed folding bike.  The bike’s folding integrated technology system is based around a quick release controlled seat post pivot.  This folding design uses no hinges or other cuts in the frame tubing, giving the Boston a very strong folding bike frame.  Folding requires no tools and can be done in less than 20 seconds for easy storage.  The Boston also features the Patented Clix Wheel Release System allowing for quick removal of the front wheel when folding the bike.  It has a single-speed drive train featuring a flip-flop hub, allowing riders to change between a fixed-gear and free-wheel setup with little effort.  The 42 x 16T drive train is low weight and geared optimally for city riding.  The Boston is available in three frame sizes.