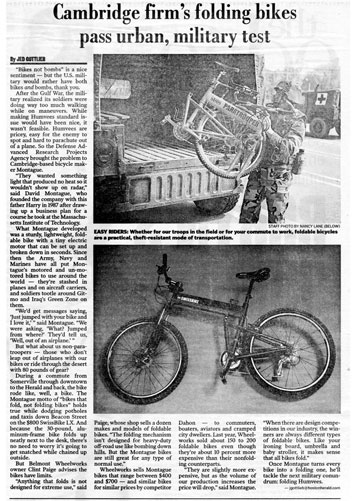 “Bikes not bombs” is a nice sentiment- but the US military would rather have both bikes and bombs, thank you.

After the Gulf War, the military realized its soldiers were doing way too much walking while on maneuvers. While making Humvees standard issue would have been nice, it wasn’t feasible. Humvees are pricey, easy for the enemy to spot and hard to parachute out of a plane. So the Defense Advanced Research Projects Agency brought the problem to Cambridge-based bicycle maker Montague.

“They wanted something light that produced no heat so it wouldn’t show up on radar”, said David Montague who founded the company with his father in 1987 after drawing up a business plan for a course he took at the Massachusetts Institute of Technology.

What Montague developed was a sturdy, lightweight foldable bike with a tiny electric motor that can be set up and broken down in seconds. Since then, the Army, Navy and the Marines have all put Montague’s motored and un-motored bikes to use around the world – they’re stashed in planes and on aircraft carriers, and soldiers tootle around Gitmo and Iraq’s Green zone on them.

“We’d get messages saying, ” Just jumped with your bike and love it,” said Montague. “We were asking: ” What? Jumped from where?” They ’d tell us ” Well, out of an airplane. “But what about us- non-paratroopers- those who don’t leap out of airplanes with our bikes or ride through the dessert with 80 pounds of gear?

During a commute from Somerville through downtown to the Herald and back, the bike rode like, well, a bike. The Montague motto of “bikes that fold, not folding bikes” holds true while dodging potholes and taxis down Beacon Street on the $ 800 Swissbike LX. And because the 30 pound, aluminum frame bike folds up neatly next to the desk, there’s no need to worry it’s going to get snatched while chained up outside.

But Belmont Wheelworks owner Clint Paige advises the bikes have limits. ” Anything that folds is not designed for extreme use,” said Paige whose shop sells a dozen makes and models of foldable bikes. ” The folding mechanism isn’t designed for heavy –duty off-road use like bombing down hills. But the Montague bikes are still great for any type of normal use.

Wheelworks sell Montague bikes that range between $400 and $700 – and similar bikes for similar prices by competitor Dahon – to commuters, boaters, aviators, and cramped city dwellers. Last year, wheelworks sold about 150 to 200 foldable bikes even though they’re about 10% more expensive than their nonfolding counterparts.

“They’re slightly more expensive, but as the volume of our production increases, the prices will drop”, said Montague. “When there are design competitions in our industry, the winners are always different types of foldable bikes. Like your ironing board, umbrella and baby stroller, it makes sense that all bikes fold.”

Once Montague turns every bike into a folding one, he’ll tackle the next military conundrum: folding Humvees. – jgottlieb@bostonherald.com