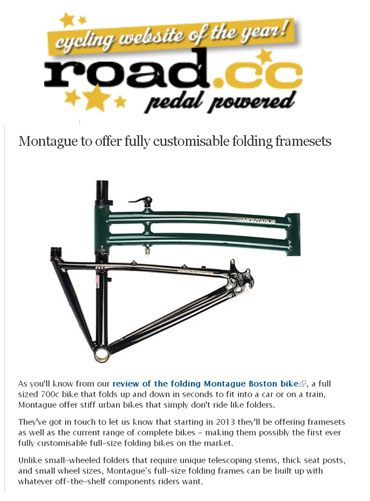 As you’ll know from our review of the folding Montague Boston bike, a full sized 700c bike that folds up and down in seconds to fit into a car or on a train, Montague offer stiff urban bikes that simply don’t ride like folders.

They’ve got in touch to let us know that starting in 2013 they’ll be offering framesets as well as the current range of complete bikes – making them possibly the first ever fully customisable full-size folding bikes on the market.

Montague currently offer three different frame styles: two urban frames, one with horizontal dropouts and one with vertical dropouts, and one mountain bike frame. “Montague frames are compatible with a wide variety of industry standard components, so they’re easy to customize,” said Montague Product Manager, Jonathan Vandenberg. “Montague riders have been sending us pictures of their unique builds for years, but since frames weren’t available, they had to purchase the complete bike and strip it down.  So for the 25th anniversary of Montague’s full-size bikes that fold, we decided that it was time to offer folding frames for fully-customized builds.”

It’s a win for dealers as well as consumers, says Vandenburg.

“When a dealer sells a frame, he is more likely to also sell all the other high margin components to build out the bike, thus increasing his profit.  We think this program will go a long way toward building strong and lasting relationships between Montague riders and their dealers” – and that could mean more Montagues in shops near you.