CAMBRIDGE, MA – October 26, 2016 – Montague Bikes, the leader in full-size folding bikes, has launched the all-new Paratrooper, a bicycle designed to deliver top-rated performance and portability to members of the military for use on the base or at home. Its full-size wheels and folding design offer the perfect solution to those looking for a versatile ride for trails and paths that can easily fit in a vehicle’s cargo area and still have plenty of room for gear.

The Paratrooper is a rugged mountain bike with a rich military history. Montague’s original Paratrooper folding bike was developed in the late 1990s under a grant from DARPA to allow airborne soldiers to drop out of airplanes and into combat with a bike. The Paratrooper delivers true off-road performance yet is versatile enough to be used for any type of riding. Featuring a Suntour suspension fork and standard 26″ wheels that can roll over obstacles with ease, the bike is especially suited for rural areas, campsites, and bike trails. The bike’s mechanical disc brakes deliver superior stopping ability and its industry standard components make repairs possible anywhere in the world.

New features include the patented DirectConnect™ folding system that provides increased frame stiffness for superior ride quality, and can be folded and unfolded in less than 20 seconds. It also comes equipped with Montague’s patented Eurobike award winning RackStand which serves as a standard cargo rack and mud guard when the bike is in use, converts into a kickstand when parked, and allows the bike to stand upright when folded. The Paratrooper retails for $899.00.

With a 24-speed drivetrain, the Paratrooper offers a wide range of gears that is perfect for hilly areas and long rides in the country. When folded, the bike compacts to just 36 inches wide, 28 inches high and 12 inches deep, ideal for tight storage spaces. It also weighs only 32 lbs, making it light and portable.

“The Paratrooper was developed for the U.S. Marines and has continued to be a popular bike with current and former military personnel.” said Ryan Walas, Director of Marketing for Montague Bikes. “The new folding system and versatile RackStand coupled with its legendary rugged performance makes the Paratrooper even more useful to veterans looking to explore the great outdoors.”

About Montague Corporation
Montague Corporation is based in Cambridge, Massachusetts USA and is dedicated to advancing cycling through the development of inventive technologies that provide its customers with an unprecedented combination of performance and convenience. Montague has been manufacturing bikes and bike components for 25 years. Visit www.montaguebikes.com or call +(617) 491-7200 for more information about Montague products and technologies. 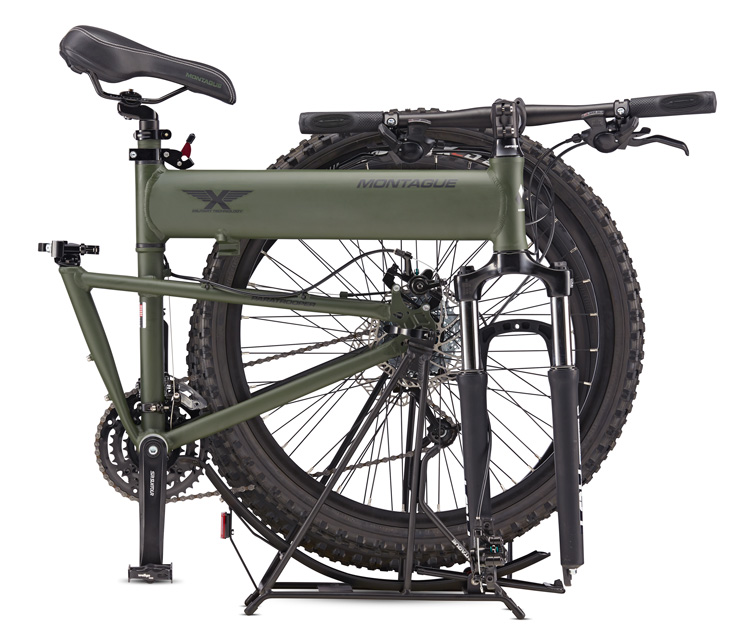