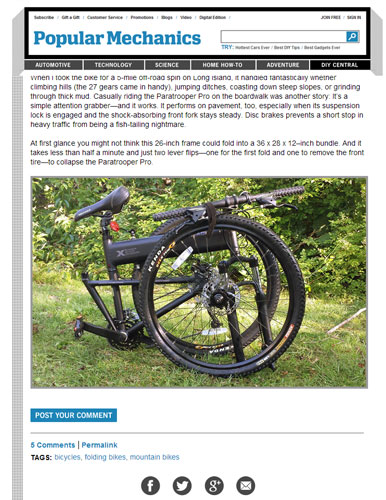 The Montague Paratrooper Pro bike is built like a tank, folds like a Swiss Army knife, and weighs less than body armor. Backed by a DARPA grant, David Montague designed the original Paratrooper bike in 1997 to be used by the U.S. Marines. The result was a cycle that a paratrooper could unfold as soon as he hit the ground. The Paratrooper line hasn’t been changed much for civilian use, but the expanded line now includes the Paratrooper Pro, a bike that’s great for the daily commute but truly excels at extreme-terrain trail riding.

When I took the bike for a 5-mile off-road spin on Long Island, it handled fantastically whether climbing hills (the 27 gears came in handy), jumping ditches, coasting down steep slopes, or grinding through thick mud. Casually riding the Paratrooper Pro on the boardwalk was another story: It’s a simple attention grabber—and it works. It performs on pavement, too, especially when its suspension lock is engaged and the shock-absorbing front fork stays steady. Disc brakes prevents a short stop in heavy traffic from being a fish-tailing nightmare.

At first glance you might not think this 26-inch frame could fold into a 36 x 28 x 12–inch bundle. And it takes less than half a minute and just two lever flips—one for the first fold and one to remove the front tire—to collapse the Paratrooper Pro.