A Bike the Marines Could Love (And Do) 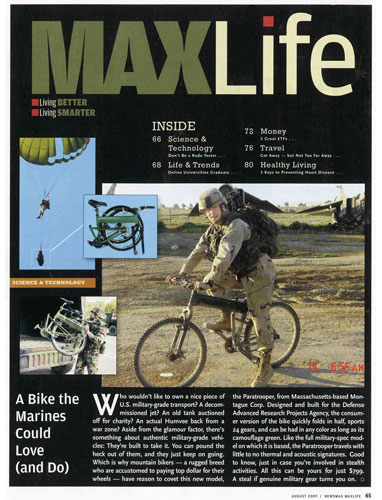 Who wouldn’t like to own a nice piece of U.S. military-grade transport?  A decommissioned jet?  An old tank auctioned off for charity?  An actual Humvee back from a war zone? Aside from the glamour factor, there’s something about authentic military-grade vehicles: They’re built to take it.  You can pound the heck out of them, and they just keep on going.  Which is why mountain bikers – a rugged breed who are accustomed to paying top dollar for their wheels – have reason to covet this new model, the Paratrooper, from Massachusetts-based Montague Corp.  Designed and built for the Defense Advanced Research Projects Agency, the consumer version of the bike quickly folds in half, sports 24 gears, and can be had in any color as long as it’s camouflage green.  Like the full military-spec model on which it is based, the Paratrooper travels with little to no thermal and acoustic signatures.  Good to know, just in case you’re involved in stealth activities.  All this can be yours for just $799.  A steal if genuine military gear turns you on.