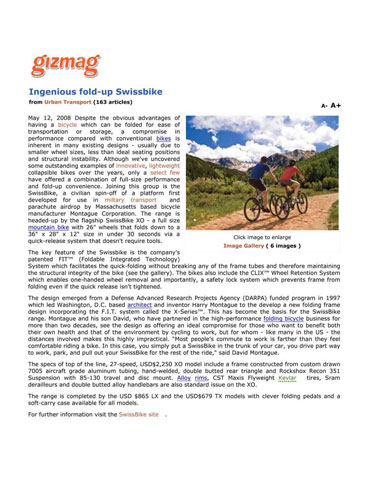 Despite the obvious advantages of having a bicycle which can be folded for ease of transportation or storage, a compromise in performance compared with conventional bikes is inherent in many existing designs – usually due to smaller wheel sizes, less than ideal seating positions and structural instability. Although we’ve uncovered some outstanding examples of innovative, lightweight collapsible bikes over the years, only a select few have offered a combination of full-size performance and fold-up convenience. Joining this group is the SwissBike, a civilian spin-off of a platform first developed for use in miltary transport and parachute airdrop by Massachusetts based bicycle manufacturer Montague Corporation. The range is headed-up by the flagship SwissBike XO – a full size mountain bike with 26” wheels that folds down to a 36″ x 28″ x 12″ size in under 30 seconds via a quick-release system that doesn’t require tools.

The key feature of the Swissbike is the company’s patented FIT™ (Foldable Integrated Technology) System which facilitates the quick-folding without breaking any of the frame tubes and therefore maintaining the structural integrity of the bike (see the gallery). The bikes also include the CLIX™ Wheel Retention System which enables one-handed wheel removal and importantly, a safety lock system which prevents frame from folding even if the quick release isn’t tightened.

The design emerged from a Defense Advanced Research Projects Agency (DARPA) funded program in 1997 which led Washington, D.C. based architect and inventor Harry Montague to the develop a new folding frame design incorporating the F.I.T. system called the X-Series™. This has become the basis for the SwissBike range. Montague and his son David, who have partnered in the high-performance folding bicycle business for more than two decades, see the design as offering an ideal compromise for those who want to benefit both their own health and that of the environment by cycling to work, but for whom – like many in the US – the distances involved makes this highly impractical. “Most people’s commute to work is farther than they feel comfortable riding a bike. In this case, you simply put a SwissBike in the trunk of your car, you drive part way to work, park, and pull out your SwissBike for the rest of the ride,” said David Montague.

The range is completed by the USD $865 LX and the USD$679 TX models with clever folding pedals and a soft-carry case available for all models.