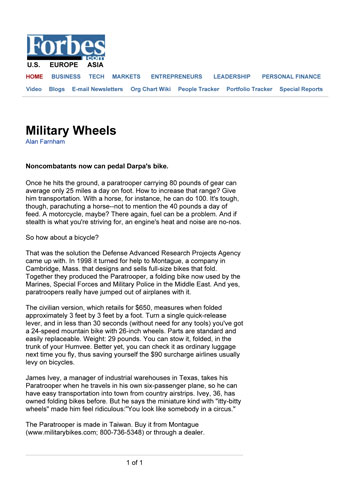 Noncombatants now can pedal Darpa’s bike. Once he hits the ground, a paratrooper carrying 80 pounds of gear can average only 25 miles a day on foot. How to increase that range? Give him transportation. With a horse, for instance, he can do 100. It’s tough, though, parachuting a horse–not to mention the 40 pounds a day of feed. A motorcycle, maybe? There again, fuel can be a problem. And if stealth is what you’re striving for, an engine’s heat and noise are no-nos.

So how about a bicycle?

That was the solution the Defense Advanced Research Projects Agency came up with. In 1998 it turned for help to Montague, a company in Cambridge, Mass. that designs and sells full-size bikes that fold. Together they produced the Paratrooper, a folding bike now used by the Marines, Special Forces and Military Police in the Middle East. And yes, paratroopers really have jumped out of airplanes with it.

The civilian version, which retails for $650, measures when folded approximately 3 feet by 3 feet by a foot. Turn a single quick-release lever, and in less than 30 seconds (without need for any tools) you’ve got a 24-speed mountain bike with 26-inch wheels. Parts are standard and easily replaceable. Weight: 29 pounds. You can stow it, folded, in the trunk of your Humvee. Better yet, you can check it as ordinary luggage next time you fly, thus saving yourself the $90 surcharge airlines usually levy on bicycles.

James Ivey, a manager of industrial warehouses in Texas, takes his Paratrooper when he travels in his own six-passenger plane, so he can have easy transportation into town from country airstrips. Ivey, 36, has owned folding bikes before. But he says the miniature kind with “itty-bitty wheels” made him feel ridiculous:”You look like somebody in a circus.”

The Paratrooper is made in Taiwan. Buy it from Montague (www.militarybikes.com; 800-736-5348) or through a dealer.