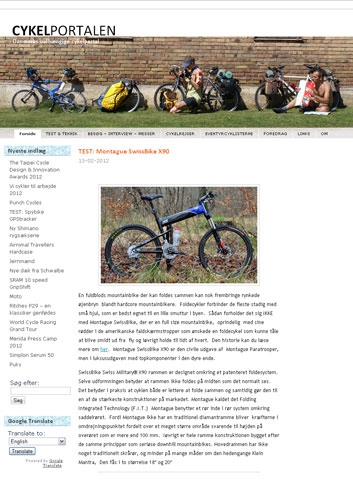 A mountain bike that folds probably raises some eyebrows among hardcore mountain bikers. Folding bicycles are still most commonly associated with small wheels that are best suited for a little getaway in the city. That is NOT the case at all with Montague’s SwissBikes™, full-size mountain bikes that have roots with the U.S. military paratroopers, who wanted a folding bike that they could jump with from a plane without sacrificing performance. You can read more about Montague’s military history here. The Montague SwissBike X90 is a civilian version of the Montague Paratrooper, but with upgraded top-of-the-line components.

The SwissBike™ SwissMilitary® X90 frame uses a patented folding system. This design means that the frame does not fold in the middle, as is most common with folding bikes. From a practicality standpoint the X90’s design makes the bike is easier to fold as well as one of the strongest frames  on the market. With its Folding Integrated Technology (FIT) system, Montague uses concentric seat tubes to allow the bike to fold. The frame structure is based on the same principles as full-suspension downhill mountain bikes. The main frame has no traditional down tube, in many ways similar to the hot times Klein Mantra. It is available in two sizes 18 “and 20”