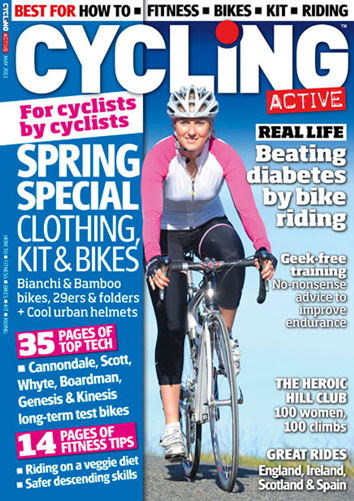 This was the first 700csingle-speed folding bike on the market. OK, so this isn’t a monumental ‘first’ like the first bike made from carbon-fibre or first bike with disc brakes — and I don’t see a queue of bike-makers lining up to release rival machines — but listen a minute, and see why ‘700c’ plus ‘folding’ divided by ‘single-speed’ might equal a big deal.

Being a folder, the mechanism is as important as almost anything else (apart from the ride, of course), and Montague has a patented system that folds the frame pretty much around on itself. Everything is controlled with quick-releases, and after a bit of practice it took me only 30 seconds in real-world situations. With full-sized wheels, and a folding system that only really halves the total length of the bike frame and rear wheel (the front wheel is removed, but more on that later), it doesn’t create the smallest of packages to lug onto the bus.

In fact, being a folder, I was allowed to carry it on to the local tram that serves Croydon town without any worry of hassle from ‘the man’. The people trying to commute to work on a Monday morning weren’t too happy about the size of the bike, however. A regular bike with both wheels removed would fill a smaller volume of space.

As Montague states, though,“This isn’t about origami, it’s aboutfolding your bike in a flash to catch abus or train,” and this is true. It is aquick fold, and for someone like me,who on occasion combines a commutewith driving and cycling, popping theBoston into the boot of the car is a loteasier than removing both the wheelsfrom a full-size bike.

OK, the ride. The only reason you’d put up with a large folder on the train/bus/car is so that when you arrive at the other end, the ride is much better than it would be on a tiny-wheeled folder. And here we’re on to a winner. Firstly, it’s a single-speed. That means no maintenance and less chance of annoying mechanical trouble. Then there’s the chunky 28mm tyres, which roll well, have a decent level of grip and haven’t punctured once. Attached to the wheels is an alloy frame that, unless you catch sight of yourself reflected in the side of a fancy new glass-fronted building, you might forget is a folder at all.