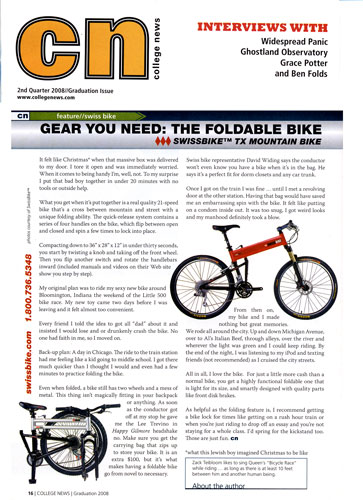 It felt like Christmas when that massive box was delivered to my door. I tore it open and was immediately worried.  When it comes to being handy I’m, well, not. To my surprise I put that bad boy together in under 20 minutes with no tools or outside help. What you get when it’s put together is a real quality 21-speed bike that’s a cross between mountain and street with a unique folding ability. The quick-release system contains a series of four handles on the bike, which flip between open and closed and spin a few times to lock into place.

Compacting down to 36″ x 28″ x 12″ in under thirty seconds, you start by twisting a knob and taking off the front wheel.  Then you flip another switch and rotate the handlebars inward (included manuals and videos on their Web site show you step by step).

My original plan was to ride my sexy new bike around Bloomington, Indiana the weekend of the Little 500 bike race. My new toy came two days before I was leaving and it felt almost too convenient.

Every friend I told the idea to got all “dad” about it and insisted I would lose and or drunkenly crash the bike. No one had faith in me, so I moved on.

Back-up plan: A day in Chicago. The ride to the train station had me feeling like a kid going to middle school. I got there much quicker than I thought I would and even had a few minutes to practice folding the bike.

Even when folded, a bike still has two wheels and a mess of metal. This thing isn’t magically fitting in your backpack or anything. As soon as the conductor got off at my stop he gave me the Lee Trevino in Happy Gilmore headshake no. Make sure you get the carrying bag that zips up to store your bike. It is an extra $100, but it’s what makes having a foldable bike go from novel to necessary.

Swiss bike representative David Widing says the conductor won’t even know you have a bike when it’s in the bag. He says it’s a perfect fit for dorm closets and any car trunk.

Once I got on the train I was fine … until I met a revolving door at the other station. Having that bag would have saved me an embarrassing spin with the bike. It felt like putting on a condom inside out. It was too snug, I got weird looks and my manhood definitely took a blow.

From then on, my bike and I made nothing but great memories.  We rode all around the city. Up and down Michigan Avenue, over to AI’s Italian Beef, through alleys, over the river and wherever the light was green and I could keep riding. By the end of the night, I was listening to my iPod and texting friends (not recommended) as I cruised the city streets.

All in all, I love the bike. For just a little more cash than a normal bike, you get a highly functional foldable one that is light for its size, and smartly designed with quality parts like front disk brakes.

As helpful as the folding feature is, I recommend getting a bike lock for times like getting on a rush hour train or when you’re just riding to drop off an essay and you’re not staying for a whole class.  I’d spring for the kickstand too.

Those are just fun. cn