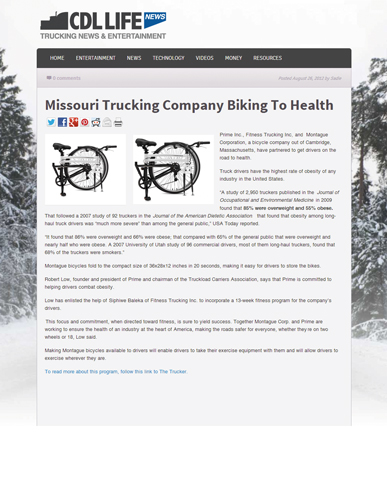 Prime Inc., Fitness Trucking Inc, and Montague Corporation, a bicycle company out of Cambridge, Massachusetts, have partnered to get drivers on the road to health.

Truck drivers have the highest rate of obesity of any industry in the United States.

“A study of 2,950 truckers published in the Journal of Occupational and Environmental Medicine in 2009 found that 85% were overweight and 55% obese. That followed a 2007 study of 92 truckers in the Journal of the American Dietetic Association that found that obesity among long-haul truck drivers was “much more severe” than among the general public,” USA Today reported.

Montague bicycles fold to the compact size of 36x28x12 inches in 20 seconds, making it easy for drivers to store the bikes.

Robert Low, founder and president of Prime and chairman of the Truckload Carriers Association, says that Prime is committed to helping drivers combat obesity.

Low has enlisted the help of Siphiwe Baleka of Fitness Trucking Inc. to incorporate a 13-week fitness program for the company’s drivers.

“This focus and commitment, when directed toward fitness, is sure to yield success. Together Montague Corp. and Prime are working to ensure the health of an industry at the heart of America, making the roads safer for everyone, whether they’re on two wheels or 18,” Low said.

Making Montague bicycles available to drivers will enable drivers to take their exercise equipment with them and will allow drivers to exercise wherever they are.