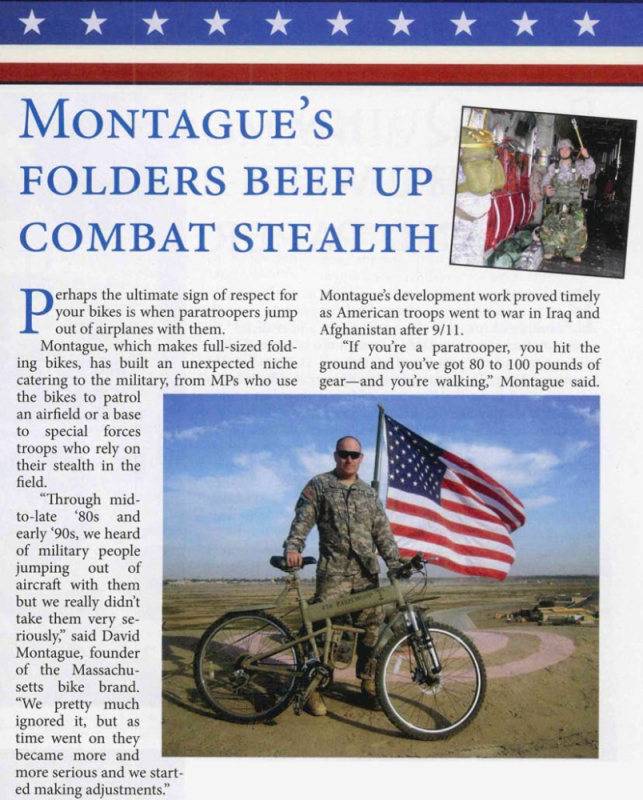 Perhaps the ultimate sign of respect for your bikes is when paratroopers jump out airplanes with them.

Montague, which makes full-sized folding bikes, has built an unexpacted niche catering to the military, from MP’s who use the bikes to patrol an airfield or a base to special forces troops who rely on their stealth in the field.

“Through mid-to-late ’80s and early ’90s, we heard of people jumping out of aircraft with them but we really didn’t take them very seriously,” said David Montague, founder of the Massachusetts bike brand. “We pretty much ignored it, but as time went on they became more and more serious and we started making adjustments.”

The relationship between Montague and the military became official in 1997, when the company received a two-year grant from the Defense Advanced Research Projects Agency to develop an electric bike suitable for American troops. Montague developed its X-Series folding frame that could quickly collapse in half and fit through the cargo door of a military aircraft.

“The number of bikes that we broke in the DARPA program is staggering,” Montague said. “We went through a lot of stuff just to prove them out and make sure they were going to hold up under military conditions.”

DARPA’s interest in bikes stemmed from the Gulf War of the early 1990s, when it realized that many troops were walking. Montague’s development work proved timely as American troops went to war in Iraq and Afghanistan after 9/11.

“If you’re a paratrooper, you hit the ground and you’ve got 90 to 100 pounds of gear – and you’re walking,” Montague said. “The ability to have a vehicle, even a bicycle, triples your range on all but soft sand. Even if you can’t ride the bicycle you can still sling 100 pounds onto it, and you can go further if you’re just using it as a mule.”

The company also learned that military bikes couldn’t be too streamlined.

Front suspension is essential when the bike is carrying 300 pounds or more. And a bike without gears is not very useful in the mountainous terrain in places like Afghanistan.

Along with more prosaic uses, Montague has heard of special operations forces using the bikes when stealth is essential.

“Bicycles produce no thermal or acoustic signature, so they’re not showing up. The enemy doesn’t know you’re coming,” he said” – Doug McClellan