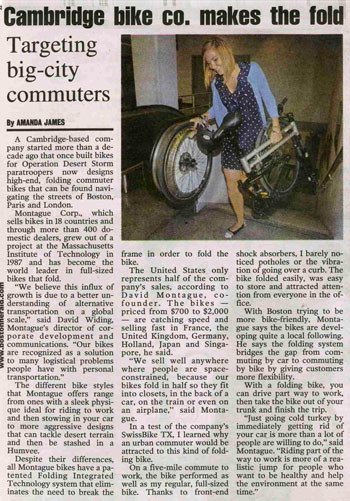 A Cambridge-based company started more than a decade ago that once built bike for Operation Desert Storm paratroopers now designs high-end, folding commuter bikes that can be found navigating the streets of Boston, Paris and London.

Montague Corp., which sells bikes in 18 countries and through more than 400 domestic dealers, grew out of a project at the Massachusetts Institute of Technology in 1987 and has become the world leader in full-sized bikes that fold.

“We believe this influx of growth is due to a better understanding of alternative transportation on a global scale,” said David Widing, Montague’s director of corporate development and communications.  “Our bikes are recognized as a solution to many logistical problems people have with personal transportation.”

The different bike styles that Montague offers range from ones with a sleek physique ideal for rising to work and then stowing in your car to more aggressive designs that can tackle desert terrain and then be stashed in a Humvee.

Despite their differences, all Montague bikes have a patented Folding Integrated Technology system that eliminates the need to break the frame in order to fold the bike.

The United Staes only represents half of the company’s sales, according to David Montague, co-founder.  The bikes – priced from $700 to $200 – are catching speed and selling fast in France, the United Kingdom, Germany, Holland, Japan and Singapore, he said.

“We sell well anywhere where people are space-constrained, because our bikes fold in half so they fit into closets, in the back of a car, on the train or even on an airplane,” said Montague.

In a test of the company’s SwissBike TX, I learned why an urban commuter would be attracted to this kind of folding bike.

On a five-mile commute to work, the bike performed as well as my regular, full-sized bike.  Thanks to front-end shock absorbers, I barely noticed potholes or the vibration of going over a curb.  The bike folded easily, was easy to store and attracted attention from everyone in the office.

With Boston trying to be more bike-friendly, Montague says the bikes are developing quite a local following.  He says the folding system bridges the gap from commuting by bike by giving customers more flexibility.

With a folding bike, you can drive part way to work, then take the bike out of your trunk and finish the trip.

“Just going cold turkey by immediately getting rid of your car is more than a lot of people re willing to do, “ said Montague.  “Riding part of the way to work is more of a realistic jump for people who want to be healthy and help the environment at the same time.”