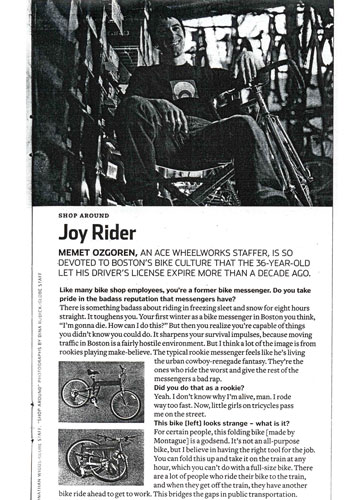 Memet Ozgoren, an Ace Wheelworks staffer is so devoted to Boston’s bike culture that the 36-year-old let his driver’s license expire more than a decade ago. Like many bike shop employees, you’re a former bike messenger. Do you take pride in the badass reputation that the messengers have?

There is something badass about riding in freezing sleet and snow for eight hours straight. It toughens you. Your first winter as a bike messenger in Boston you think: “I’m gonna die. How can I do this?” But then you realize you are capable of things you didn’t know you could do. It sharpens your survival impulses because moving traffic in Boston is a fairly hostile environment. But I think a lot of the image is from rookies paying make-believe. The typical rookie messenger feels lke he’s living the urban cowboy renegade fantasy. They’re the ones who ride the worst and give the rest of the messengers a bad rap.
Did you do that as a rookie?

Yeah, I don’t know why I’m alive, man. I rode way too fast. Now little girls on tricycles pass me on the street.

This bike looks strange- what is it?

For certain people, this folding bike (made by Montague) is a godsend. It’s not an all purpose bike, but I believe in having the right tool for the job. You can fold this up and take it on the train at any hour, which you can’t do with a full-size bike. There are a lot of people who ride their bike to the train and when they get off the train, they have another bike ride ahead to get to work. This bridges the gaps in public transportation.

I tried to bike to work, but the helmet ruined my hair, mud splashed on my back, and grease smeared on my pants. Can you help?

Fenders are one of the most essential items for commuting. You stay cleaner, dryer, and warmer. You can buy little bands to gather up your pant legs. The hair problem is the only one that can’t be solved. Once you get helmet hair, there’s no going back.

Do you have to play in a band to work in a bike shop?

It’s not a coincidence that a lot of us are musicians – bike shops are repositories for people who don’t easily fit into normal social arrangements.