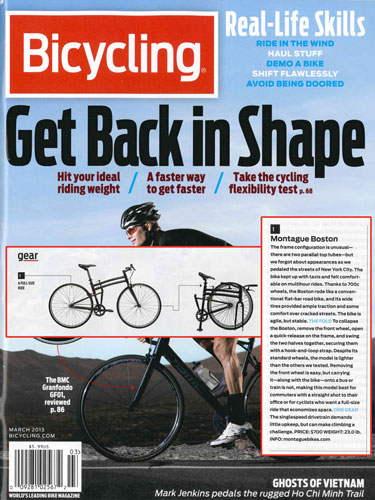 Space Saving Bikes To Get You Around Town

There’s something beautifully simple about riding through the city, zipping between stores and exploring new parts of town under your own power. But city life brings challenges – and for cyclists one of the most pressing can be finding space to store your bike. When these four models are done carrying you around town, they can be folded into compact packages that fit easily into your office or abode.

The frame configuration is unusual – there are two parallel top tubes – but we forget about appearances as we pedaled the streets of New York City. The bike kept up with taxis and felt comfortable on multi-hour rides. Thanks to 700c wheels, the Boston rode like a conventional flat-bar road bike, and it’s wide tires provided ample traction and some comfort over cracked streets. The bike is agile, but stable.

THE FOLD
To Collapse the Boston, remove the front wheel, open a quick-release on the frame, and swing the two halves together, securing them with a hook-and-loop strap. Despite its standard wheels, the model is lighter than the others we tested. Removing the front wheel is easy, but carrying it – along with the bike – onto a bus or train is not, making this model best for commuters with a straight shot to their office or for cyclists who want a full-size ride that economizes space.

ONE GEAR
The singlespeed drivetrain demands little upkeep, but can make climbing a challenge.