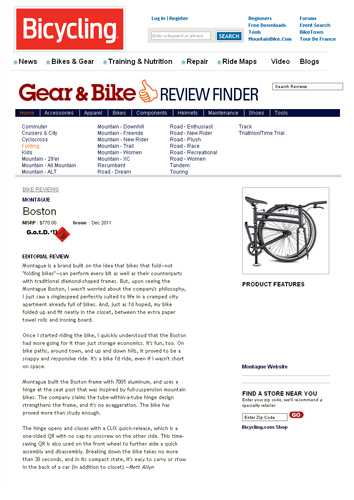 Montague is a brand built on the idea that bikes that fold—not “folding bikes”—can perform every bit as well as their counterparts with traditional diamond-shaped frames. But, upon seeing the Montague Boston, I wasn’t worried about the company’s philosophy, I just saw a singlespeed perfectly suited to life in a cramped city apartment already full of bikes. And, just as I’d hoped, my bike folded up and fit neatly in the closet, between the extra paper towel rolls and ironing board.

Once I started riding the bike, I quickly understood that the Boston had more going for it than just storage economics. It’s fun, too. On bike paths, around town, and up and down hills, it proved to be a snappy and responsive ride. It’s a bike I’d ride, even if I wasn’t short on space.

Montague built the Boston frame with 7005 aluminum, and uses a hinge at the seat post that was inspired by full-suspension mountain bikes. The company claims the tube-within-a-tube hinge design strengthens the frame, and it’s no exaggeration. The bike has proved more than study enough.

The hinge opens and closes with a CLIX quick-release, which is a one-sided QR with no cap to unscrew on the other side. This time-saving QR is also used on the front wheel to further aide a quick assembly and disassembly. Breaking down the bike takes no more than 30 seconds, and in its compact state, it’s easy to carry or stow in the back of a car (in addition to closet).—Matt Allyn